PIEZOGRAPHY® IS UNLIKE ANY OTHER PHOTOGRAPHIC PRINTMAKING SYSTEM IN THE WORLD. 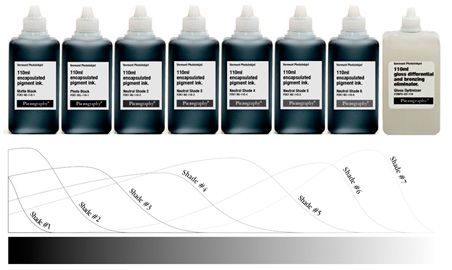 Piezography Inks and CurvesPiezography is a brand of monochromatic inks and software that produce what is unarguably the absolute highest-standard in black and white printing. It was first introduced as a Trademarked brand in 2000 and has gone through successive improvements and changes over the years.

It’s primary purpose is printing black & white photographs with carbon. Today, it is a fully mature and developed product with benefits that remain the target of past and current OEMs. It’s a notch well above current OEM systems and sets a level of its own.

A Piezography system includes a set of replacement inks, a set of reusable cartridges, a special OS X / Windows printer RIP which replaces the Epson printer driver, and an array of proprietary media profiles. Extensive user manuals are provided as well as the Industry’s highest regarded product and technical support.

One of the benefits of the Piezography proprietary media profiles is to double the optical resolution of the converted Epson printer. They also produce more printable locations for microdots allowing a substantially smoother tonal lattitude. Combined with up to seven shades of carbon ink, these proprietary media profiles produce greater accuity and detail, smoother skin tones, increased shadow and highlight detail, and substantially more gray levels than the Epson ABW system. Piezography is the only system capable of printing tens of thousands of gray levels making it a perfect accompaniement to 16 bit raw photography.

The Piezography system is totally democratic. An iPhonographer can make extraordinary 20x24 prints with a Piezography system. Owners of the new high resolution cameras, and those investing in Leica sensors will finally see the gains that these investments in gear can produce. The plain fact is that Piezography squeezes the best out of any digital camera. When film is scanned, a much greater tonal lattitude can be printed than in the darkroom. When used to make digital negatives, Piezography emulates tradtional film without any of the digital artifacts associated with making inkjet film.

The final proof is always in the printing. The most striking characteristic of a Piezography print is produced from the increased load of high quality carbon pigment being printed. The dMax will pick up nearly a full stop as it dries. The quality and preparation of the carbon printed in a thick emulsion on the fine art matte printmaking paper produces an effect not unlike light reflecting off the dust of a butterflies wings. Piezography when printed on fine art baryta surfaces eliminates all gloss differential and bronzing.

The donor printer needs to be in good health. Because tens of thousands of more gray levels are printed than when using the Epson ABW system, your imaging skills are bound to be excited and exercised. Using more shades of lt black carbon ink produces smoother and wider tonal lattitude and sharply increases both highlight and shadow detail. The proprietary media profiles drop about 40% more ink dots than can Epson media profiles or ABW settings. The end result of a Piezography print, is that it has “breath” and”soul”.

Inexpensive ($85 OS X, and $50 Windows) software is installed. The only printers we produce are listed on our webstire. The easy to use interface and the Piezography workflow is well documented. Installation of the inks does not require flushing of the printer, but flushing is a recommended best practice. The entire set of color inks from an Epson printer are exchanged with up to 11 Piezography monochromatic inks at one time. The printer while dedicated exclusively to black & white printing can later be reconverted back to color.

Color images must be converted to grayscale prior to printing and saved in either Adobe RGB 1998 or Gamma 2.20. Windows users can print only one image at a time. OS X users have a layout interface permitting the printing of several images with independent resolutions. A Piezography media profile that matches the media being printed is selected prior to clicking the Print button. The printing time is not doubled even as the optical resolution of the printer is.

And it really is quite easy to operate.

WHAT IT TAKES TO MAINTAIN THE SYSTEM

Piezography inks are easier on the print heads than the OEM inks. It is not uncommon for a Piezography printmaker to have used the same printer for 6 or 7 years. Some even longer. You should clean the capping station and print head every six months (we have excellent how-to videos). You need to shake the Piezography carbon inks regularly in order to maintain a perfect density value of each of the shades of ink. If you are going to leave the printer unattended for several months, we recommend re-using or acquiring a set of flushing cartridges. The printer can be stored at least one year with PiezoFlush.

We utilize more ink than Epson’s Advanced Black & White (ABW) process resulting in more substantive mid-tones and highlights. This is a distinction that separates Piezography from EPSON.  As an illustration, imagine overturning a crate of marbles. The majority of marbles will rest adjacent to the crate. The remainder would disperse in a random pattern with fewer marbles the further they traveled from the crate. This patterning is similar to Epson’s dither which is comprised of only three black inks. The Epson driver prints fewer of those “in between” dots of ink “tricking” the eye into seeing very light gray. In printing those highlights, Epson prints as little as 2 or 3 percent of total ink output.

In contrast, Piezography’s seven gradations of ink with proprietary media profiles, prints nearly 45% of total ink output in the highlights.  From the mid-tones to the blackest black, Piezography resolves levels of detail that escape the Epson system. Additional shades of ink in service of superior media profiles make a substantial difference when compared to Epson’s ABW output.

WHAT INK ARE YOU?

There are at least five ink sets available to choose from that are installed as an entire set of shades. The amount of shades differs depending upon printer model. These ink sets mimic traditional photography process.

CARBON is in a league of its own. It is the most fade resistant ink set in the world. It’s carbon and carbon is warm. The only way to make carbon print more neutral is to remove the dilutions and shades until mostly just black is printing. But to have luxurious tone – one has to accept the warmth carbon brings – a lovely brown tone. With Piezography PRO (available late 2015) you will be able to modulate the tone of Carbon by blending Selenium or and Neutral into it using a new generation of Piezography Curves. Get Carbon 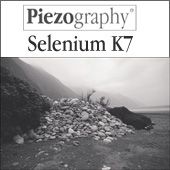 SELENIUM is our most popular ink set probably because it mimics short batch selenium toning of fiber based prints. It has that definite museum look of contemporary photography. Get Selenium 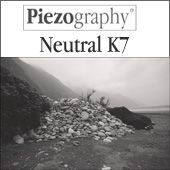 NEUTRAL is our second most popular ink set. It is designed to be achromatic to the human eye when viewed under 5000k on a specific grade of paper (Hahnemuhle Photo Rag). It mimics the standard observer of CIE. The ink set will become warmer or cooler depending upon the color of the white of the paper it is printed on. Get Neutral 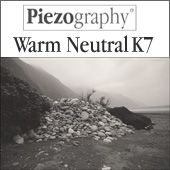 WARM NEUTRAL is the Coca-Cola of Piezography. Our first ink set released in 2000 was “warm neutral”. This ink set has been updated and mimics the warmth found in old Agfa process – but it is not an old time looking ink set. This is Cathy Cone’s favorite tone being neither too warm nor too neutral – just right. Carbon should be our most popular ink set but it is not. All Piezography ink sets are very fade resistant and will lose very little precious tone over their lifetime. Get Warm Neutral 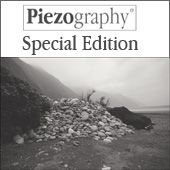 SPECIAL EDITION is nearly as popular as Neutral and this ink set shows off the blending capabilities of Piezography ink. Each shade # of one set can physically be mixed with the same shade # of another set. Special Edition blends warm carbon shadows into selenium midtones into neutral highlights. And it has a decidedly platinum/palladium look. Get Special Edition 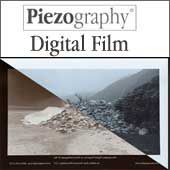 PIEZODN is better way to make digital film because it overcomes the limitations of other systems that use color inks to make film. Color inks work well enough only when the dithering does not become apparent. When the dithering of a color ink negative is apparent, it will necessarily be at the extremes of that particular color ink being driven in a way that is not natural to the printer. Venetian blind like patterns begin to evolve and this becomes apparent in the final print. See All PiezoDN-Ready Inksets 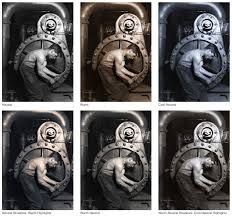 PRO is our ink and it is essentially two ink sets in one: a warm and a cool that can be digitally mixed in software to allow for perfect toning (or split toning!) of the monochrome print. This ink does it all. It does perfect digital negatives and supports matte and gloss printing. It also does single pass gloss printing! Get Pro