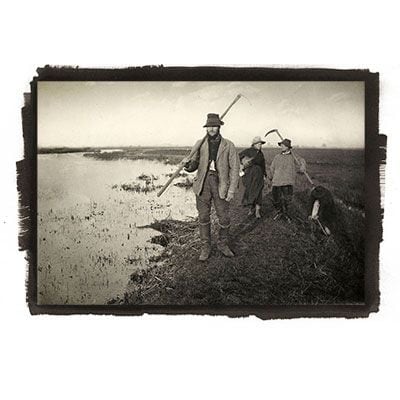 The ultimate photographic medium. Highly collectible. Considered to be the most archival process. An exceptionally luxurious and long tonal scale which is impregnated directly into the printmaking paper. It’s “skin” and “feel” and reflective qualities are simply unparalleled. Nothing quite like it (although Piezography is often thought of as Pt/Pd on steroids). And although a legend follows it around that it is technically difficult, it is actually surprisingly easy to control with the PiezoDN Digital Negative. With traditional negatives it is actually quite difficult to control. If you come to our Vermont workshops (private or group), we can get you making high standard prints within three-four days. The PiezoDN digital negative is perfectly calibrated to the chemistry and prints match images displayed on a calibrated monitor

The Malde-Ware method, otherwise known as Print-Out Platinum-Palladium Printing, or the Ammonium Print-out was invented in the 1980s by Pradip Malde and Dr. Mike Ware. The Malde-Ware method is the original ‘print-out’ platinum process of Giuseppe Pizzighelli from 1887. Malde-Ware employs a better-behaved iron sensitizer. Ammonium ferric oxalate is substituted for the notoriously unstable ferric oxalate. Further, ammonium salts of platinum and palladium are used rather than potassium salts yielding a higher degree of chemical solubility while also producing more hydroscopic surface when applied.

Ammonium is so stable that its employ in the sensitizer as well as in both metal salts allows for a pre-sensitized solution to be made up which when stored in a tightly capped bottle can be used for up to three years (quite often longer) without any degradation in image quality.

This perfect synergy of chemistry and noble metals has some advantages in economy, accessible chemistry, and exposure control.

Platinum or palladium may be used individually, or mixed in any proportion, providing a choice of image hue ranging between cool to neutral grey-black and rich sepia.

dMax is naturally higher because a more soluble metal salt is used, yielding a higher metal coating weight which makes double-coating unnecessary. Typically where other printing out processes recommend 2.3ml of emulsion for an 8x10 print, Malde-Ware requires only 1.3 ml and yet produces higher dMax, acuity and smoothness.

A higher degree of metal solubility is available in Malde-Ware chemistry which makes its application less expensive per print. Typically, a 100ml bottle of pre-sensitized solution can produce 100 8x10 prints.

A controlled degree of humidity is allowed in the sensitized paper to promote the formation of a printed-out image in platinum/palladium during the exposure, requiring little or no development. When paired with PiezoDN digital negative control, humidity can be used to produce a wide range of color tone expressions without affecting the contrast of the image. A carefully-devised clearing sequence ensures that all the iron is removed from the paper.

Methodology 1 can produce an extremely warm sepia print. Methodology 3 can produce a neutral print. “Can” because a very wide range of color expressions is actually available by increasing or decreasing the humidity of the paper just prior to exposure. Further, the two emulsions can be mixed to affect some split-toning.

Unlike develop out process in which platinum increases the “graininess” of the print, the inclusion of platinum in the Malde-Ware process promotes a special type of acuity that is referred to as “smooth detail”. Platinum is so highly beneficial in both beauty and sharpness that we produce both Methodology 1 and 2 with a 50-50 mixture of platinum and palladium.

As a reference, the sepia produced by a 50-50 mixture Pt/Pd in Methodology 1 sensitizer is much warmer than traditional develop out palladium prints developed in hot potassium oxalate. In this case, the benefit of the inclusion of platinum adds significantly more acuity than found in pure palladium develop out process or the more popular lithium based print-out process.

As a reference, Methodology 3 produces a much richer neutral print than develop out palladium process developed in ammonium citrate developer. The importance of the inclusion of platinum cannot be overstated.

The chemistry Vermont PhotoInkjet is offering using 50% platinum is more economical to use than other methods yet yields superior visual results. We suggest rod coating this metal rich emulsion in 5 passes. We routinely measure dMax in the 1.45 range on Legion Paper’s Revere Platinum paper. Between 1.2ml and 1.5ml is required for an 8x10 image on most of the popular papers.

The stability of the chemistry allows these prints to be cleared immediately. However, we are recommending the clearing method of Dr. Mike Ware:

You can read in more detail about the Malde-Ware process on Pradip Malde’s website by clicking here.