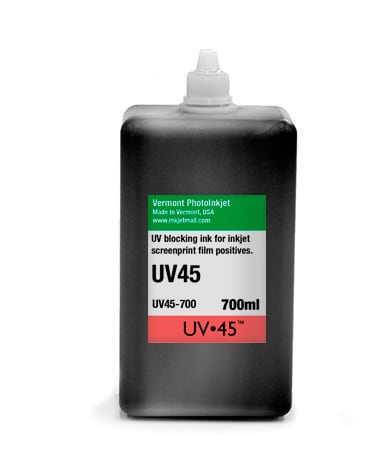 You get one bottle of ink.

This ink is compatible with all brands of software used for the separation of colors in screen process printing. It is designed to be used in multiple channels and can build a UV density exceeding 4.50. This is the most superior ink for the creation of photo silkscreen film positives.

For alternative process, this ink can develop an optical density of 3.20 in a single channel printing on Pictorico when used with QuadTone RIP. I can be used in continuous tone systems and combined with itself or our other UV strengths to produce complex alternative process film positives.

This ink is compatible with nearly all brands of traditional inkjet coated clear film.

You do not need to use PiezoFlush to flush your printer before installing these inks. The ink can be used to flush out any existing dye or pigment inks. However, it is not compatible with dye sublimation ink which must be flushed thoroughly prior to using this ink.