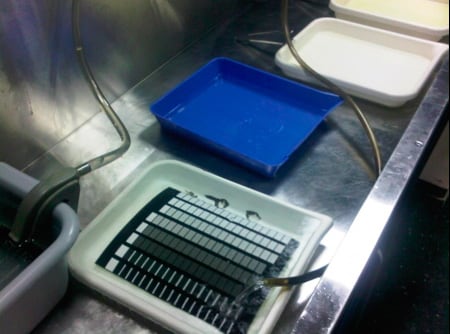 SKU: PZDN-SEL-220-SET8
0.0 / 5
/Piezography-Digital-Negative-Methodology-1-220ml-set-8.html
How to Use our Bottles How to Use Piezography About PiezoDN

Note: This ink set though still offered, has been superceded by PiezoDN software to calibrate a traditional Piezography K7 glossy or matte & glossy ink set that can also be used to make prints.

Methodology 1 & 3 ink sets were developed in 2013 to work with pre-designed QTR curves which required a user-defined Photoshop curve to produce a linearization. This is superceded by PiezoDN software which automates linearization, requires no Photoshop curve, and allows the user to work in positive image. The original Methodology 1&3 curves have been made PiezoDN compatible and are part of the PiezoDN software download. But, no further development is planned for Methodology 1&3. We no longer recommend these ink sets for digital negative.

Methodology 3 uses an inkset with five shades of monochromatic ink and an accompanying set of Piezography produced .quad film media curves for use with QuadTone RIP on Pictorico Pro Ultra Premium OHP Transparency Film. The inks comprise Shades 2, 2.5, 3, 4.5, and 5. These five inks produce inkjet negatives and positives that are at a much higher standard than if using color inks to make a film negative / positive. Methodology 3 mimics traditional continuous-tone silver film that has been developed in a wide range of chemistry in order to produce varying density ranges (the difference in density between film base+ fog (dMin) and fully exposed film (dMax). Five settings are available according to dMax: 1.40, 1.50, 1.60, 1.90, 1.80. They each produce a density range .20 less than the dMax. These curves produce a film base+ fog of about 0.20.

Silver prints, platinum and pallladium prints, carbon-print, photogravure, cyanotype, kallitype, and many other traditional photographic mediums are suited to the density ranges that are possible when using Methodology 3. The below chart is our recommended curves for these mediums.

Methodology 1 uses an inkset with seven shades of monochromatic ink and an accompanying Piezography produced .quad curves for use with QuadTone RIP on Pictorico Pro Ultra Premium OHP Transparency Film. The inks comprise Shades 1, 2, 2.5, 3, 4.5, 5, 6 & 7. Methodology 1 is available for those who require dMax as high as 3.00 for alternative process such as Gum Bichromate Printing, and others that would benefit from film that is nearly opaque. Methodology 1 can also be used to make silver prints, Pt/Pd, etc. However, presets for these are not provided as they are with Methodology 3. Instead, the printmakers uses one .quad curve and limits the output levels of Photoshop to approximate the required density range.

You get eight bottles of ink. Piezography Selenium ink, shades 1, 2.5, 3, 4.5, 5, 6, 7 - and one bottle of PiezoFlush to use in the unused cartridge postions of your supported printer.

The curve for Methodology 1 designed by Piezography will produce a density range of from dMin up to 3.0 OD for fitting to a wide range of alternative processes. Because Piezography produces tens of thousands of gray levels during output, it is possible to limit the dMax in Photoshop to a desirable range and still produce exceptional tonal latitude.

The curves are designed to be used with Ultra Premium Pictorio OHP film. The curves have not been tested with other inkjet films.